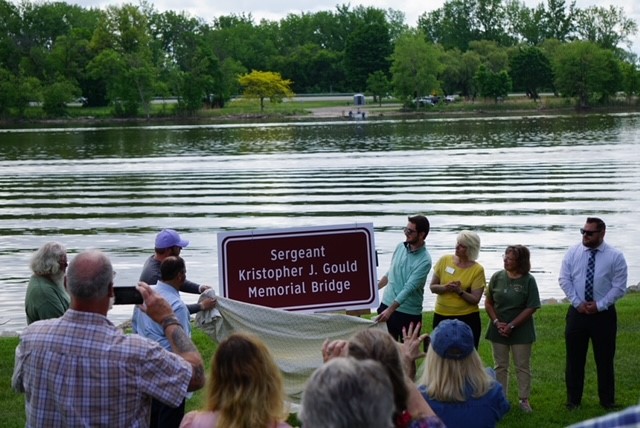 State Rep. Timmy Beson, R-Bangor Township, and others stand by a foam sign replica for the Sergeant Kristopher J. Gould Memorial Bridge on Saturday, May 28. Gould was killed in action during a 2011 deployment to Afghanistan.

The “Sergeant Kristopher J. Gould Memorial Bridge” is the M-13 bridge spanning Cheboyganing Creek in southern Bay County. Gould, who served in the Michigan Army National Guard and the U.S. Army, was killed in Afghanistan in 2011, during his third tour of duty.

Beson, R-Bangor Township, and others from the community joined Gould’s family at their home near the bridge to dedicate the bridge and commemorate Gould’s service.

“Kristopher Gould grew up here in our community, and then he answered the call of duty,” Beson said. “He fought for safety and freedom for us back home, and gave his life — the highest sacrifice. Sgt. Gould is a hometown hero, and an American hero.”

Beson last year sponsored the bill naming the bridge in honor of Gould, which became law in November. Signs bearing the new name were recently placed on either side of the bridge, and a foam replica of the signage was present for the ceremony on Saturday.

Rep. Beson, who sits on the House Appropriations Subcommittee on K-12 School Aid, says the Legislature and state government need to increase their attention on Michigan kids who have come through the pandemic, saying what is needed is a long-term focus on losses in educational opportunities and socialization.

From left, state Sen. Kevin Daley, R-Lum; state Rep. Timmy Beson, R-Bangor Township; and Greg Buzzard of That Guys BBQ & Grill stand together at the Labadie Rib Fest at Veterans Memorial Park in Bay City on Thursday, July 28. That Guys won first place for both ribs and sauce in the people’s choice awards at the festival.

Rep. Beson: Services, savings in budget will benefit the people of Michigan

A balanced, bipartisan state budget to support critical efforts such as police and roads, which was approved by state Rep. Timmy Beson and the Michigan Legislature earlier this month, became law today.